The Siberian Cat may not be as popular as the Ragdoll, Persian, and Siamese, but it has its own unique charm. It is a beautiful kitty made more adorable by its adventurous spirit. It is, after all, Mother Russia’s national cat. It is a very resilient cat, a trait necessary to survive in the harsh winters of northern Russia. This is also a very adaptable and affectionate feline. And if you have a cat-friendly dog in the household, the Siberian will also be a good friend. Siberians are a sturdy feline breed. They also have this innate intelligence that makes them trainable. And if you are allergic to cat dander, the Siberian can be a good choice. But, is the Siberian cat the feline pet you’ve been waiting for? Find out more about this Russian feline beauty before you make the decision to bring one home.

History of the Siberian Cat

There is very little information as to the actual origins of the Siberian Cat. Records show that this Russian feline has been around since 1000 CE. Russian children’s books and fairy tales often describe the cat as having magical superpowers, protecting young children. Some legends about these cats presented them as instrumental in the opening of gateways or passageways to unseen realms. Local townsfolk, however, describe Siberian cats as very proficient ratters or “mousers”. Their main task is to control rodent infestations in shops and farms.

Some Russians call the Siberian Cat the Russian Longhaired Cat, owing to its long and dense triple coat. Others call it the Siberian Forest Cat or Moscow Semi-longhaired Cat. This kitty thrived in the harsh environments of Siberia, where it relied on its thick coat and powerful frame to help it survive.

In 1889, Harrison Weir published his book “Our Cats and All about Them”. The literature included felines that graced the very first cat show of the modern age. The very first one occurred in 1871 in London’s Crystal Palace. There are other literary works that mentioned the Siberian Cat. These included John Jennings’ “Domestic and Fancy Cats” in 1898 and Helen Winslow’s “Concerning Cats” in 1900. It is interesting to note that Winslow’s work was the first publication to feature a picture of the Siberian Cat.

Between the 1970s and the 1980s, Russian cat fanciers of the Siberian began organizing themselves. In Leningrad, the Kotofei Cat Club began creating the standards that will define the Siberian as a breed. The club based these standards on a white-and-brown tabby and a blue-and-white lynx.

Also around this time, other Siberian cat fanciers thought of improving on the breed. They crossbred Siberians with Siamese cats, leading to the creation of the Neva Masquerade. This is a variety of Siberian cat that’s known for its color point.

Towards the last decade of the 21st century, Siberian cats were already making their way into American shores. The very first Siberians to reach American soil were 12 kitties that joined the 1989 All Union Cat Show.

It would be another year, in 1990, when the cats will reach American soil as “permanent residents”. Three Siberian cats were imported by Elizabeth Terrell in 1990, who was a breeder of Himalayan cats. She learned from a 1988 Trade Journal that a member of the Russian Cat Fanciers Association desired to import Himalayans. Terrell traded two of her Himalayan kitties for three of the Russian breeder’s Siberian felines. She named the kitties Kaliostro, Ofelia, and Naina.

In 1992, The International Cat Association accepted the Siberian Cat into its New Breed Program. It took breeders and Russian cat fanciers associations almost two years to finalize the standards of the new breed.

On the 4th of December 1994, delegates congregating at a session of the World Cat Federation gave the final approval of the Siberian Breed standards.

Two years after, in 1996, TICA gave the go-signal elevating the breed to championship status. What this means is that the Siberian cat can now compete in TICA-sanctioned cat shows and earn awards. It is one of 73 feline breeds that can enter TICA competitions.

Quick Facts about the Siberian Cat

To say that the Siberian is a unique cat is an understatement. This feline looks a lot like the Norwegian Forest Cat and the Maine Coon. In fact, if you are not familiar with this breed, you’d think that it is a variant of either cat breed. But the fact is that the Siberian has been around for at least a thousand years. It has many fascinating stories to tell. Here are some of the important and useful facts you may want to know about this breed of feline.

By now you already have an idea as to what kind of cat the Siberian is. Maybe you are already considering getting one. However, we do recommend trying to understand a few things first related to a Siberian’s health, nutrition, care, grooming, and temperament.

Siberians are one of several kitties that are very sturdy. This is not surprising, considering these cats hailed from the harsh winter environments of Siberia. You’ve got to be one tough creature to survive the unforgiving landscape.

However, the Siberians that we see today come from those bred outside Siberia. It is possible that they may have acquired certain diseases that are transmissible from one generation to the next.

One very peculiar hereditary condition that is quite common in today’s cats is Hypertrophic Cardiomyopathy or HCM. We’re not saying that all Siberians will have this disease. We’re only pointing out that majority of cats, regardless of breed, have this disease. In HCM, the muscles of the heart undergo unnecessary thickening. This can compromise the delivery of vital nutrients and oxygen to other cells in the cat’s body.

Another potential health problem that you may see in Siberian cats is Pyruvate Kinase Deficiency. This is an enzyme that facilitates the normal functioning of the cat’s red blood cells. A deficiency in such an enzyme can lead to feline anemia and its complications.

Obesity is also a major health concern. As of 2017, almost 60% of all cats in American households are either overweight or obese. Obesity can bring many life-changing complications to both you and the Siberian cat.

Related Posts: Best Probiotics for Your Cat and Best Vitamins For Cats

Siberians subsist on a diet that’s rich in high-quality animal proteins and healthy fats. It’s important to emphasize “animal” proteins because there are also proteins found in plants. The problem with plant proteins is that they do not contain certain essential amino acids that the cat needs. Hence, feeding the Siberian Cat should always include a rich source of animal-based proteins.

Most Siberian cat fanciers recommend giving these cats natural foods like chicken, beef, pork, and lamb. They can be either boiled or served raw. In case you are going to boil them, be careful not to add any seasonings as these can be dangerous to your kitty. If you’re serving raw food to a Siberian, it’s best to be very particular about where you source the ingredients.

You can give commercially-available cat food. However, it’s better to give canned or wet cat food than kibbles. Wet cat food contains more proteins plus more moisture. While it is true that Siberians have a fascination for water, they remain quite resistant to drinking water from their w. Canned pet food often comes with at least 78 percent moisture.

Caring for the Siberian cat is not that difficult. However, there are some pointers you have to know.

These cats are very intelligent. They got their intelligence from having to survive in the harsh environments of northern Russia. As such, it is important for potential Siberian cat owners to keep these cats mentally stimulated. Invest in interactive cat toys as well as puzzle toys. Teaching the Siberian a few tricks can also help sharpen its mental abilities. They also enjoy a game of fetch.

One very peculiar characteristic of Siberian cats is their sociability. They can form very strong bonds with a fellow Siberian or any other cat breed. If you have dogs in the house, it can befriend them, too. There is one major drawback to the Siberian’s sociable nature. They are prone to bouts of separation anxiety. Hence, this is not the ideal pet for those who will be leaving the house all day long. These cats need the companionship they can get from their human owners.

Owing to their very unique nature, it’s best to keep Siberians inside the house. If ever you do allow it to go outdoors, make sure to keep an eye on it. This kitty can net catnappers several hundreds to a few thousands of dollars from a willing but unsuspecting buyer. The good news is that they are trainable, so you can teach them to like being walked on a leash.

Keep in mind that the Siberian thrived in a frigid environment. That’s why it has a very thick coat. If you live somewhere that’s hot and humid, a Siberian may not do so well. At the very least, the highest possible temperature that you can expose these cats to is 91 degrees Fahrenheit. Any temperature higher than 91 often translates into serious health issues.

Siberian cats may produce lower levels of the Fel d1 allergenic protein, but this doesn’t mean they don’t shed. They have very thick fur that tends to blow on a seasonal basis, often every autumn and spring. During these times of the year, it’s best to brush the Siberian’s coat every day. For the rest of the year – summer and winter – once or twice weekly brushing is enough.

Bathing the Siberian is not necessary. It retains the fastidious behavior of other cats. However, if you do think it’s necessary for it to have its bath, then you can do so. Use an appropriate cat shampoo; one that contains natural ingredients. You don’t want harsh chemicals to irritate the kitty’s skin and leave you with more problems to face.

Most pet parents forget to brush the cat’s teeth. This is a very important part of its regular grooming. In an ideal scenario, Siberians should have their teeth brushed every day. Given that this is impractical, brushing once or twice a week is sufficient.

The nails of the Siberian need monthly trimming. The eyes also require cleaning every week. Its ears can also benefit from a weekly examination and cleaning.

Fanciers of the breed say the Siberian is a dog in a cat’s body. True enough, it shares many of its temperament characteristics with some of the finest dogs. It is very affectionate, sociable, and adaptable. It can get along well with children, other cats, and cat-friendly dogs.

Siberians have an easy-going nature. They love to use this trait whenever they’re around children. Older kids will love the energy and athleticism of Siberian cats. Younger kids can appreciate the devotion, affection, and docility of this Russian kitty.

It loves to please its people, like dogs. It can follow its human master around the house, but you will never see this cat demand 100% attention. Nothing else can make the Siberian happier than being with its family and friends.

Siberian cats are perfect for families with kids as well as multi-pet households. And if this is your first time becoming a cat parent, the Siberian is an excellent pet. 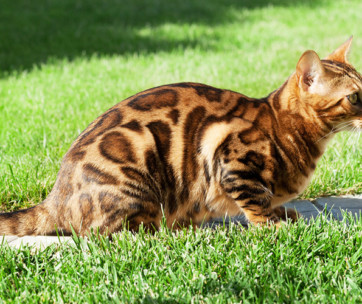 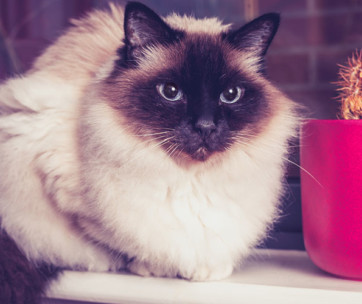 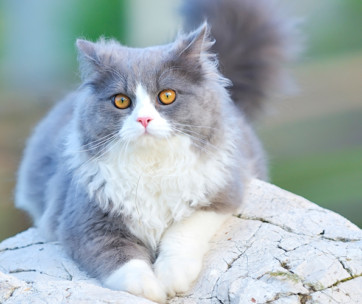 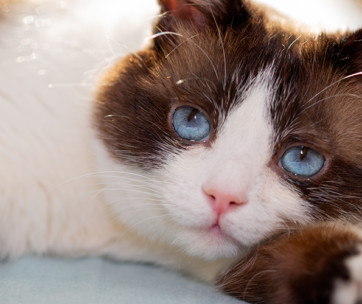 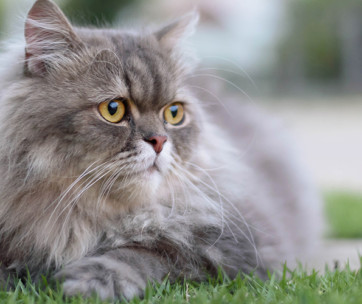