By Krista Martino
Published 13:09 pm
PetSide may earn a small commission from affiliate links in this article. Learn more
Share:

Located near the popular holiday destination of Broome, which can be found in the Kimberley region of Western Australia, you can find a loveable young bull calf named Peanut.

Peanut fancies himself more caine than bovine, having been brought up with six other dogs from birth, and were it not for the fact that he looks like a bull, you wouldn’t know from his behavior!

Swimmers in the area have grown accustomed to seeing the  small and gentle pale brown calf at the water’s edge, and take a lot of enjoyment out of watching him follow his owner around like a puppy and paddle in the water with his canine siblings. They particularly enjoy a nice stroll along the waters of Coconut Well. 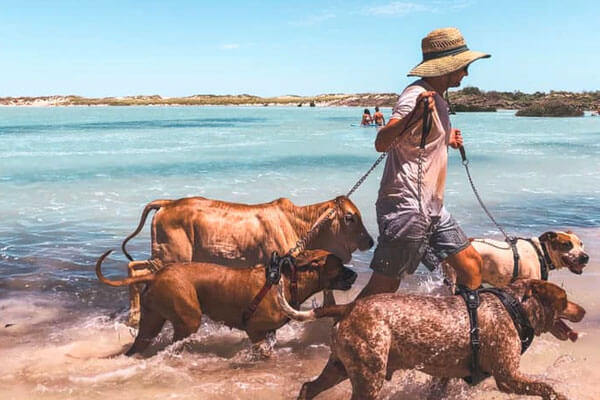 “As far as the calf is concerned, he thinks he’s a dog,” Mr Foy, Peanut’s adopted father, told ABC Kimberley. “He’s still learning what he is and who he is.”

Peanut is a 2-month-old Brahman calf (so named for the lump seen at the top of his back), and has been living in a small suburb located somewhere near Broome. He has spent so far in his short life surrounded by a large animal family containing peacocks, chickens, pigs, and of course his six doggie siblings. Of course they are all owned by someone, and that someone is Edward Foy, the savior and adopted father of Peanut.

Peanut did not have an easy start to his life, and was found by Mr. Foy at the side of the road next to his deceased mother on a hot summer’s day.

“The mother was killed by a car or a truck and Peanut was hanging around sniffing the remains,” Mr Foy had told ABC Kimberley. “He still had the umbilical cord attached to her.”

Sadly, by the time Mr Foy had reached Peanut and his mother she was long past being saved, and peanut had been exposed to the elements awaiting rescue for some time, unable to leave his mother’s side to seek shelter or shade. Mr Foy took pity on Peanut and took him home to be tended to and cared for properly during these delicate first stages of his life.

Calves are very big eaters, requiring large amounts of milk to fuel them every day, owing to their large size. Where a human newborn baby may drink upto a single litre of milk a day, a newborn calf can easily go through upwards of 10 litres a day.

Mr Foy found this out the hard way, as Peanut was going through 16 litres of calf formula a day! Mr Foy was required to use specially made milk for the young calf, in order for Peanut to get the correct nutrients needed for healthy growth, especially after such a rough start.

The special formula needed to feel Peanut costs Mr Foy $250 a month, but he said that Peanut is worth every penny. 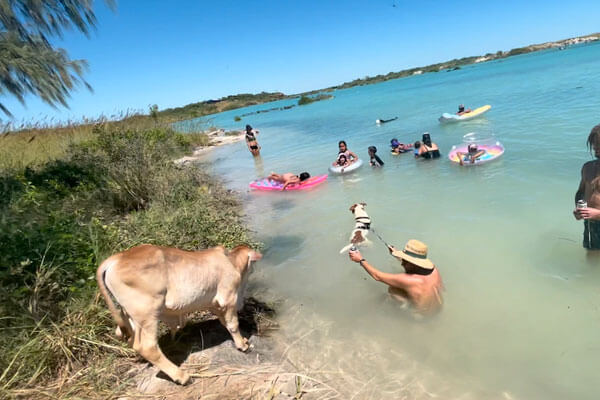 Peanut is not actually the first cow that has been owned by the Foy family!

“We had a pet cow, [he was called] Philip,” Mr Foy had mentioned to ABC Kimberley.  “We had him for 26 years … he used to like squashing my mum’s veggie patch.”

Having had a cow before, Mr Foy was equipped with some helpful foreknowledge on how best to care for the baby bull, and was able to take on the task with confidence.

Peanut has only ever known life primarily with dogs, and having not been raised by his mother has taken his social cues from his canine family instead.

“He has never seen another cow before, so as far as he’s concerned, he’s a dog and so he’s started picking up the same personality as a dog,” He told ABC.

It seems highly likely that his dog-like behavior has stemmed from the unusual domestic upbringing he has experienced, as opposed to the wild upbringing he would have had with his cow mother.  “I normally walk him down the beach, and he’ll always follow me all the way down while I go for a fish.” 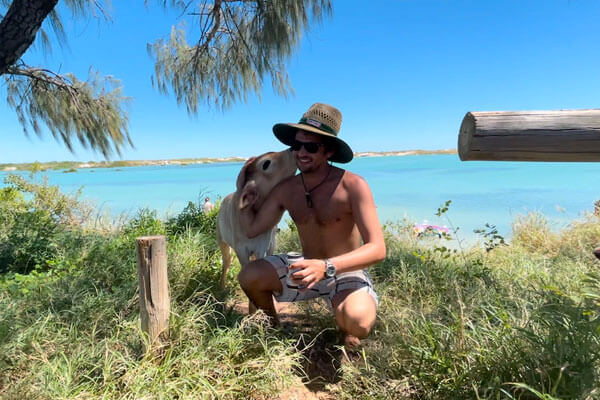 Looking to the Future

The only thing that needs to be considered with Peanut is the possibility of his horns becoming dangerous as he grows older, but Mr Foy does not feel that it is right to remove them, and would feel guilty if he did.

He has, however, come up with an interesting solution for this dilemma, “I’ll get two pool noodles and then stick them on so that when he hits you it will feel like rubber.”

Peanut is thriving with his unexpected adopted dad and family, and Mr Foy hopes that this lovely calf will continue to do so and live a very long and happy life with them.

“Hopefully in the future I can ride him through the bottle shop,” Mr Foy had finished.