By Krista Martino
Published 12:52 pm
PetSide may earn a small commission from affiliate links in this article. Learn more
Share:

Every now and again a story comes along that gives you a tingly feeling inside and restores your faith in the bond between animals and humans.  The account reported recently by Jacksonville Fire Rescue Department on their social media pages is one of the best you’ll find. It’s not surprising that they wanted to share it with the public. One of the brave firefighter teams, identified as TL21, rescued a family cat from inside a house after they were called out to a domestic fire at the property.

The Facebook post from 8th March 20201 clearly shows a distressed cat being carried from the house gently by the firefighter in full protective equipment and breathing apparatus. The poor kitty is completely drenched, presumably by the water used to extinguish the fire. We all know how much cats hate water. The combination of the fire and the drenching must have been very stressful for the poor feline. The extensive fire damage to the property can be seen in the background – this was a significant fire. But thankfully, help was on the way! 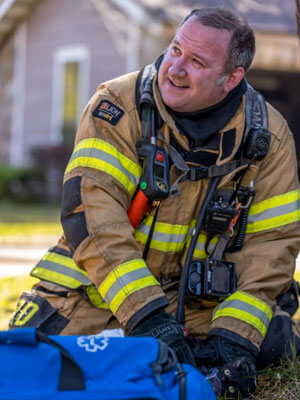 That help was provided by one of the brave Jacksonville Fire Rescue Department officers in Florida. The officer is identified as Eng Shawn Fallon and in the first pictures, the state of the health of the kitty is not clear. Their tail is hanging limply, and they do not appear to be moving.

Later pics show how Shawn Fallon gave oxygen to the pus to try and revive them and help with the effects of smoke inhalation. He also gave the cat some water to drink. 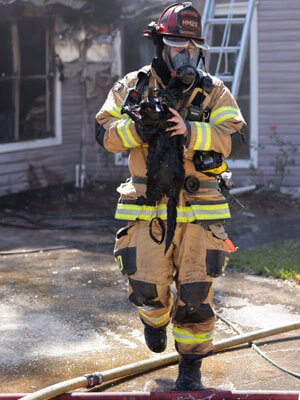 The final picture is the most heart warming of them all and will bring a tear to the eye of cat lovers all over the world. The brave firefighter has removed all of his breathing apparatus and is crouched over the stricken cat holding an oxygen mask close to their face. His beaming smile says it all! The kitty is clearly reviving, and a pair of bright green eyes are staring straight into the camera. Meanwhile, there is the broadest grin on the face of Shawn Fallon that says it all. His efforts have not been in vain and the rescue has been a great success. All in a day’s work for the brave men and women of the fire departments all over the country who do so much to keep us (and our treasured pets) safe.

Who Comforts The Comforters? This Dog Cares For Poorly Pets At The Vets!