By Krista Martino
Published 15:07 pm
PetSide may earn a small commission from affiliate links in this article. Learn more
Share:

On the evening of June 2nd, Ralph Dorn had been looking for Harley, his Goldendoodle pooch. When Dorn was unable to find his pup on the shore he looked into the lake to see if Harley had decided to go for an evening swim. That was when he saw Harley around 200 feet from the shore, but not alone.

The gentle 6-year-old pup was swimming alongside another animal. After a few minutes of trying to focus on the other animal in the fading sunlight, Dorn realised Harley had found himself a fawn. On a facebook post shared by Dorn, he recalls how he was unsure of how the fawn came to find itself in the middle of a lake, but that Harley had simply “jumped into action” on seeing the distressed baby deer.

According to Dorn, Harley had jumped into the lake and swam out to meet the lost fawn. Upon reaching it Harley then focussed on herding the baby out of the water and back to the safety of the shoreline. Speakinging with PEOPLE, Dorn explained that Harley had been careful to paddle alongside the fawn right up until it reached the shore. The entire time correcting the baby whenever it seemed to veer off course. 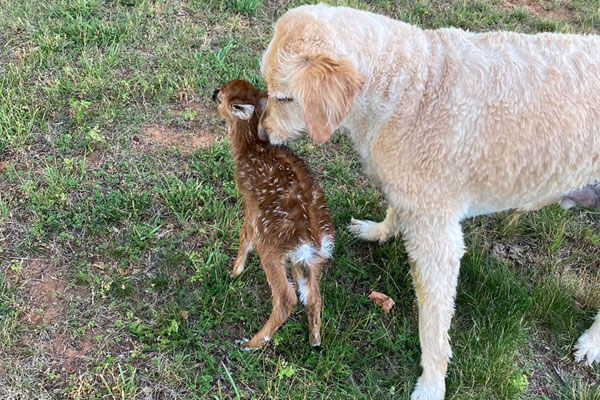 Dorn had waited patiently at the water’s edge for Harley to return with his new friend, in order to help the two very wet creatures back up the steep bank and onto dry land. After Dorn had removed the fawn from the water and placed it on the grass at the water’s edge, Harley stayed very close, sniffing the lost and bewildered fawn as well as gently licking it clean.

Dorn told PEOPLE of how the pooch had refused to leave the fawn’s side, explaining that Harley had “just kept interacting with it, licking it and caring for it.”

Not long after Harley had successfully retrieved the fawn from the water and thoroughly cleaned it, the mother made an appearance. The doe had gently approached, but did not dare to get too close with Dorn and his dog standing over her baby. Because of this, Dorn took Harley back into the house which was not far from the water’s edge and watched as the doe patiently waited for the dog and human to be out of sight before taking her baby away.

However, “the story continues” as Dorn put it. Apparently, whilst Dorn and his wife, Patricia, were enjoying their morning coffees, Harley’s behavior caught their attention. According to the Facebook post, Harley was “restless running from window to window.” Only when he opened the door did Dorn notice that he could hear the fawn bleating outside.

The fawn, who Dorn had suspected of being only a few days old when Harley rescued it, had been tucked away inside the treeline where Harley immediately ran out to greet it. After a sweet moment in which the fawn stopped bleating and greeted Harley with its tail wagging, followed by a few sniffs of one another and a nose touch, Harley left. It would seem after making sure the fawn was okay, Harley was happy to calmly return back to the house.

Dorn told PEOPLE that the fawn immediately settled down after seeing Harley. After their brief reunion the fawn and its mother eventually wandered away. The two haven’t been seen since that day.

The retired Marine Corps pilot has owned Harley since he was a puppy and was not surprised by this act of compassion. With Dorn explaining that ever since the Goldendoodle was a young puppy, they’ve been able to tell he has a heart as golden as his breed. “He has always been like that with children and animals. He loves them all.” Dorn told PEOPLE.

According to Dorn, Harley has previously worked as a fully certified therapy dog. In doing that job he would visit care facilities for the elderly, sit with children at the local library during reading time, he is even best pals with the family cat, Zsu Zsu. The loveable pooch is also extremely close with Dorn’s four grandchildren. In fact Dorn described the relationship as Harley being “100 percent glued to them.” 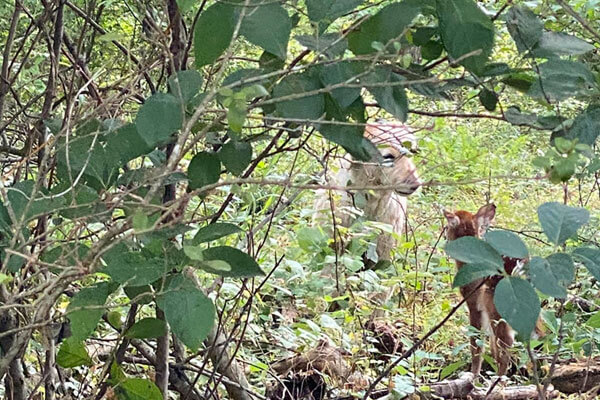 Dorn’s Facebook post, regaling people with the wonderful tale of Harley and the fawn, has gone viral across the social media platform. This has come as a shock to Ralph, and his wife Pat, who is a retired Navy nurse. Pat describes their reaction to PEOPLE as being “just amazed,” she goes on to explain how they had “no idea of the reaction,” in regards to the 111,000 likes the post has received to date.

They have received countless supportive comments as well as private messages thanking the couple and their dog for providing such an uplifting story. With some people sharing the images and videos with their grief groups to bring smiles to others that need it.

“We are very happy that this has touched so many people and brought joy to so many as well.” Dorn says.