By Krista Martino
Published 11:24 am
PetSide may earn a small commission from affiliate links in this article. Learn more
Share:

A recent study published on Sunday 23rd May suggests that there is a possibility that sniffer dogs could be utilized to detect covid-19 infections. Much like sniffer dogs that have been used for years to detect bombs and drugs. The study is still very early in the trial phase, but results have shown some promise.

In a collaboration between the group Medical Detection Dogs and the London School of Hygiene & Tropical Medicine at Durham University, Phase 1 trials have now been completed. Scientists developing the study designed the Phase 1 trial to examine whether, under carefully controlled conditions, a dog could be capable of sniffing out and identifying covid-19 infection.

The trial was done by having six working dogs, named Marlow, Millie, Lexi, Tala, Kyp, and Asher, sniff several clothing and mask samples. One of the samples had tested positive for Covid-19. The dogs used in this trial ranged between the ages of four and six years old. The group had included Cocker Spaniels, Labradors, and Golden Retrievers.

Cocker Spaniels are known for their strong noses and natural instinct to stiff our anything of interest. Labradors and Golden Retrievers are the most common breeds for companionship roles and seeing-eye dogs.

The work of this trial currently awaits peer review before being published in a medical journal. As it stands the results have been printed in a preprint study. James Logan, a project lead on this study spoke with CNN to say that the initial early results are “extremely exciting”.

The released results of the first trial have shown the dogs to have a sensitivity rate of around 82-94% on average. With a specificity rate of 76-92% in response to the Covid-19 sample, meaning the dogs had displayed a clear odor association with the infected sample. To further the study, researchers are attempting to identify the chemical composition of the Covid-19 odor the dogs had been attracted to.

Logan had gone on to say that the dogs were capable of detecting Covid-19 with “incredible speed and accuracy.” Apparently, this could also be true, even if the person is asymptomatic, as this would not alter the smell of the infection.

Detecting asymptomatic Covid-19 infections could help to massively slow the spread of infection by having the affected person stay at home until the infection dies off.

The authors of the study do state that the “golden standard” for Covid-19 detection is still the PCR test. But that dogs could potentially offer a quicker and easier way to screen for the virus in high-traffic areas. They could also be used to dissuade people from visiting areas where contact is more likely whilst knowingly infected.

The use of dogs as a visual deterrent has also been around for many years, and these would be no different. People thinking of traveling whilst knowingly infected or potentially infected, would be inclined to think twice about whether or not the journey is worth it.

Though whilst the early results from the Phase 1 trials have shown a lot of promise, it is still early. More trials will need to take place along with more extensive study and research before being able to determine whether or not dogs would be a viable option for Covid-19 detection as a means to combat the pandemic.

A virologist at Warwick Medical School, who did not contribute to the study and goes by the name of Lawrence Young said in a statement that densely crowded areas or well-ventilated spaces (such as outdoors) might “compromise the ability of the dogs” to detect the virus. Well ventilated spaces mean faster scent dispersal, whilst crowded areas may confuse the scent, particularly with low-level infections.

Young also went on to question whether or not this test would show such results in real-world applications. By this, he means would human beings provide as good a sample for detection as pieces of clothing and infected masks? Additionally, he raises the concern that there are varying levels of specificity from dog-to-dog, and so there is the potential that this could result in increased numbers of false-positive results. 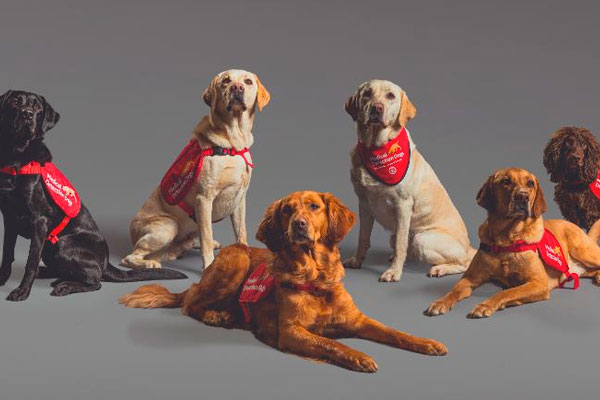 The Covid-19 Risk to The Dogs

Potential issues regarding the use of dogs for Covid-19 detection have been raised by Mick Bailey, a professor of comparative immunology based at the Veterinary School of the University of Bristol. Bailey is unassociated with this research but has pointed out that “Infection of dogs with SARS-CoV-2 has been reported”.

The infection of SARS-CoV-2 (the name of the virus which causes Covid-19) in dogs has displayed both asymptomatic responses, as well as various physical symptoms, much like humans. Bailey quickly pointed out that, owing to the fact that it has been proven that SARS-CoV-2 can infect dogs, the use of dogs to intentionally breathe in the virus poses a significant risk to both the canine and its handler.

Bailey goes on to explain that he feels a way to avoid the possibility of dog sniffers catching the virus would be to vaccinate them. Though there is currently no licensed vaccine available for canines, Bailey feels there does not seem to see any reason not to use the human-approved vaccine for dogs as well. Though apparently, the low number of reported infections in dogs would make Phase 3 trials difficult to obtain.

The final question raised by Bailey in regards to the use of dogs as Covid-19 detectors is perhaps the most important. Could it be that the scent signature being found by the sniffer dogs used in this study is not specific to Covid-19? But rather a scent connected with a wide variety of respiratory viruses such as influenza?

As the study continues in the quest to see if canines could in fact be used as Covid-19 sniffer dogs, Phase 2 is currently being planned. Phase 2 will include the use of an actual human being that has tested positive for the Covid-19 virus, in replacement of the mask and clothing samples that had contained samples of the virus. This will give the dogs a chance to test their senses against not only the smell of the virus but the human being infected by it.

The Viral Ad ‘Haunted Victorian Child’ Dog Has Been Adopted