By Krista Martino
Published 13:58 pm
PetSide may earn a small commission from affiliate links in this article. Learn more
Share:

Micheal Joy had come to terms with the idea that he would never see his lost dog again. Sam, Joy’s Labrador Retriever / Siberian Husky mix, went missing from an Army base in Fort Benning, GA, in the summer of 2016.

After looking for Sam for some time outside of his working hours, Joy was forced to conclude that Sam would not be coming back any time soon, if at all. But, almost five years after his beloved pup went missing, Joy received a phone call to tell him that Sam had been found over 800 miles away in Cleveland. 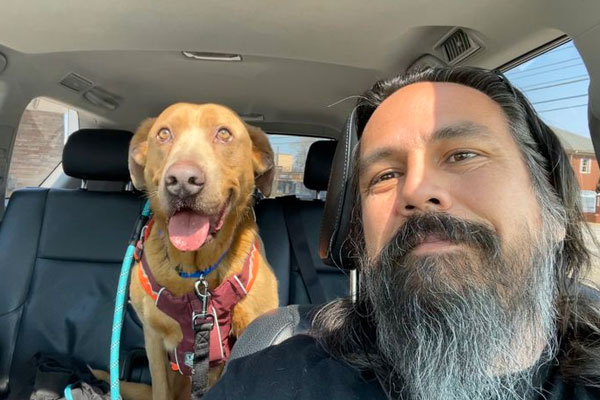 Micheal Joy had been working as an Army medic at the time that Sam went missing. He has since retired and now resides in Clarksville, Tennessee. Speaking with Cleveland News, Joy explained that he has never quite gotten over the loss of his canine pal. He had had two dogs at the time; following Sam’s escape in the summer of 2016, Joy’s second dog passed away in December of that same year.

“My other dog died and they were really close,” Joy has explained, “It was the last thing that tied me to him.”

Two weeks after the tragic loss of their second dog, less than a year later, Joy and his wife had decided to welcome a new puppy into their family. They named their new pup after their lost dog, Sam.

But even having brought a new four-legged friend into their lives, the Joy family, Micheal, his wife, and his two children, still very much felt the absence of Sam and his brother. Joy had actually been scrolling through photographs of Sam as a young puppy and reminiscing with his wife and kids just days before receiving the wonderful news of Sam’s discovery. 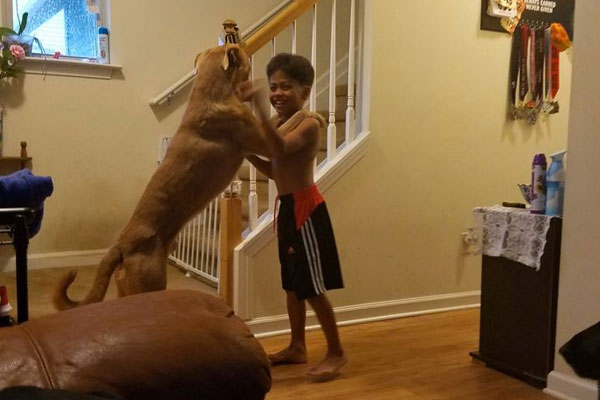 The phone call from Cleveland shortly followed, with the fantastic news that Sam had been found, almost five years after he went missing, and over 800 miles away from the base he has been staying on in Georgia.

“When I first got the phone call I was like ‘I don’t know what you’re talking about. I’ve never been to Ohio. Are you sure he’s my dog? Can you describe him?’ And she said he has light brown hair and I was like ‘Wait a second. You can’t be talking about the same Sam,’” Joy told Cleveland News.

The Cleveland Division of Police had found Sam wandering the streets as a stray on April 2nd, 2021. Upon discovering the lost pup the officers decided it would be best to turn him into Animal Care & Control, City Dogs Cleveland to be cared for. Staff at the Animal Control facility vaccinated Sam and performed a routine medical assessment of his condition. They then scanned him for a microchip, and upon doing so, discovered Micheal Joy’s contact information.

City Dogs Cleveland offered to extend their usual hold time to a week when they noticed how far the Joys would have to travel to collect their pooch, but this was unnecessary. Upon receiving the news, the Joy family jumped straight into their car the following morning and proceeded to travel 8-hours North to Cleveland from Tenessee to collect their lost friend.

“The second I saw him it was a rush of emotion,” Joy described to Cleveland News.  “My wife and daughter were crying. Me, I don’t show emotion too well. I was a medic for 20 years and I saw a lot of stuff. But seeing him I almost teared up. I was so happy to see him.”

It took Sam a moment to realize that his family had returned to take him home, and upon being brought out to Joy had to re-adjust to his old owner’s scent and sound. 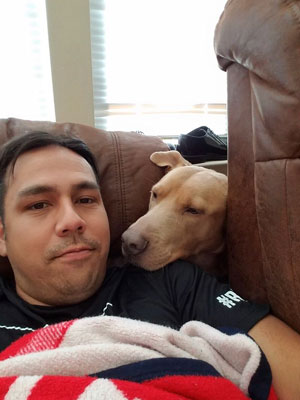 The manager of City Dogs Cleveland, Michelle Harvanek, spoke in a press release proudly praising Cleveland Animal Care and Control, “One of the best parts of our job at Cleveland Animal Care & Control is reuniting lost dogs with loving owners who have been looking for them,” Harvanek said. “We take a lot of pride in our efforts to trace microchips right away and making several attempts to contact owners. We also place a huge emphasis on microchipping dogs. Every dog that leaves our care through adoption or return to owner is microchipped if they weren’t already.”

He goes on to sum up Sam’s return home in an accurate and uplifting statement, “This is one of those very feel-good stories that make all of our hard work worth it.”

According to Joy it only took Sam a day to re-adjust to being home again with the Joy family. And he is apparently just as calm, affectionate, and mil-mannered as he was before going missing five years ago. They are all overjoyed to be together once again as a family.

If your dog needs to be microchipped, it is advisable that you contact Cleveland Animal Care and Control, if you live in the area, on 216-664-3069.

Chihuahua Adoption Post Goes Viral Thanks to its Refreshing Honesty!