By Krista Martino
Published 14:32 pm
PetSide may earn a small commission from affiliate links in this article. Learn more
Share:

The Arapahoe County Sheriff’s Office (ACSO) has had the joy of recently introducing a new member to their team! With the joyous announcement that a new therapy dog is in town – Rex the labrador puppy.

On Tuesday 25th May the Arapahoe County Sheriff, Tyler Brown, swore in the adorable 10-week-old back labrador retriever puppy, lovingly known as Rex. The puppy was donned in a grey working-dog vest labeled “Therapy Dog in Training”.

Sitting flat on his behind with his front paws raised, Rex calmly waited and allowed Brown to swear him in without a fuss.

Rex is the department’s very first therapy dog, marking a pivotal moment in mental health care in Arapahoe. He will be paired with a School Resource Officer by the name of Deputy John Gray.

Gray has worked with the Sheriff’s office for the last eleven years and was first assigned to the SRO unit six years ago. He is currently assigned to the elementary schools they will be visiting and therefore already has a rapport with the staff and students. 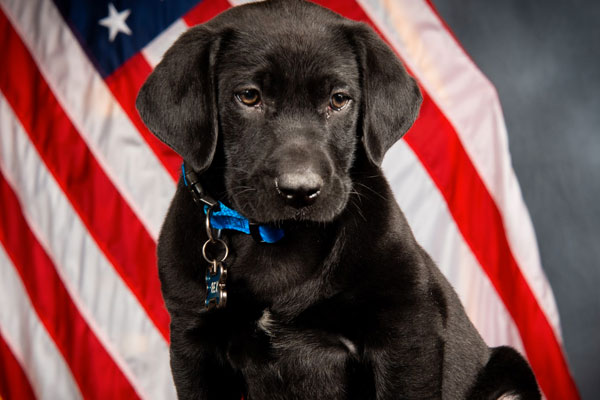 Additionally, Gray also works as part of the SWAT Negotiation Team, often working with citizens in crisis. This experience has helped him to understand what may be of assistance to a person in need. He is very much looking forward to the incorporation of Rex into their LPS school programs.

Rex and Gray have quickly begun to develop a bond and will be assigned to several elementary schools in the Littleton Public School District (LPS) which is found in Arapahoe County. The Dog and Deputy duo will be working with a variety of students with special needs.

Their aim is to help students through periods of stress by providing them with comfort at a time of need. This is a particularly effective therapy method with many children, especially those that are suffering from depression or anxiety.

Gray spoke with MSN on the issue of mental health care with the younger generation. Stating that mental health is an “ongoing concern”. He explains that there is a “chemical change in the brain” when humans interact with and pet a dog, this change is known to reduce stress levels.

Gray goes on to say that he hopes that the presence of Rex as a therapy dog throughout these elementary schools will help the affected students to feel safer, calmer, and more comfortable in the school environment, and hopefully “bring a smile to their faces”. 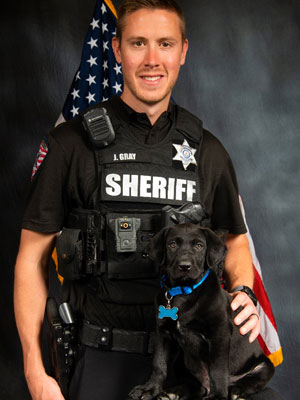 Rex is still very young and in need of further training to be a fully qualified therapy dog. He will spend the next year being carefully trained in basic obedience. This will be done by having him attend an American Kennel Club good citizen class as well as an intensive class in order for him to be labeled as an American Kennel Club Certified Therapy Dog.

Sheriff Brown expressed his pride in their decision to develop this partnership with Littleton Public Schools. Implementing the new Therapy Dog program could be instrumental in aiding children that are struggling with their mental health, and Brown hopes that by working with Littleton Public Schools they can turn it into a great success story. Brown goes on to say that they are all very much looking forward to “this new and exciting way to work with the LPS School District.”