Raw Chicken For Dogs: Is It Safe?

Many advocates of a raw food diet for dogs believe that we should be feeding them raw meat, as this is most similar to what their ancestors would have eaten in the wild, and provides them with the protein and nutrients that they need. General advice is that the majority of Fido’s diet should be made up of specially formulated dog food, and supplemented with natural foods, including raw meat and vegetables. There are some meats, such as raw lamb ribs, that are thought to be fairly safe for your pup to consume raw – but what about chicken?

Chicken necks in particular are a popular choice for raw-fed dogs, as these meaty bones are considered to contain the natural balance of minerals your dog would receive in the wild, and chewing them is also said to be good for doggy dental health. But raw chicken for humans raises a huge red flag. It can carry harmful bacteria that causes food poisoning, serious illness and even death. So, is it the same for your best friend; is raw chicken safe for dogs?

To put it simply, no. Raw chicken can also pose a health risk for your dog, and many experts advise that it is best avoided. However, the argument is not quite as cut and dry as it might appear. Read on for a summary of the risks and benefits of feeding your pooch raw chicken, so you can make an informed decision as to whether to hand over that chicken neck.

The Benefits of Cooked Chicken

Firstly, we should begin by pointing out what a good choice cooked chicken can be for your hungry pup. Although its nutritional value will be lower than that of raw chicken, boiled chicken is still a lean meat that contains lots of the protein your pup needs for energy, without being too high in calories. It’s also relatively safe for your dog to consume – just make sure it’s boneless chicken, as cooked bones can splinter and get stuck in their throat or intestines. It is also important to ensure the chicken is plain, as sauces and seasonings often contain onion and garlic, which are poisonous to dogs. Boiled chicken can be fed to your dog a couple of times week, alongside their regular food, or given as an occasional treat.

The Risks of Raw Chicken

In contrast to this, raw chicken, although high in nutritional value, poses similar health risks for dogs as it does for humans. Raw chicken can carry the Salmonella bacteria, which can make your dog ill, and in severe cases may even be fatal – although disease in healthy canines is rare and symptoms are generally limited to tiredness, vomiting and diarrhea. You should consult your veterinarian immediately if your dog displays any of these signs after eating raw chicken.

In 2018, researchers warned dog owners that feeding their faithful friends raw chicken could cause a rare form of canine paralysis called acute polyradiculoneuritis, or APN. This happens when the dog’s immune system begins to attack its own nerves, leading to debilitating paralysis in the legs, neck and head. The condition can be fatal, although most dogs do recover after months of care. It is thought to occur as a result of the bacteria Campylobacter being present in raw chicken. Although rare, cases of the disease are on the rise, and this is considered to be as a result of an increase in raw-fed diets.

A rise in the amount of raw meat in canine diets has also been linked to increased cases of hyperthyroidism in dogs, another rare condition in which an excess of the thyroid hormone is produced, leading to a hyperactive metabolism. This often causes dogs to lose weight, despite having an increased appetite and eating and drinking more than usual. It can also cause vomiting and increased urination, and the long term effects are heart and kidney failure. Feeding dogs raw chicken necks can result in them ingesting thyroid hormone from the thyroid tissue or gland on the neck, which over time leads them to develop hyperthyroidism. This is one reason to at least avoid feeding your dog the neck of a raw chicken, and perhaps look at other body parts.

Finally, there is also the argument that raw chicken, even if it is free from harmful bacteria, is not very nutritious for your dog. This is because modern factory farmed chickens are fed an artificial concoction of grain, bread and soy waste products, which contain high levels of omega-6 fatty acids, and not enough omega-3, compared to their natural diet. This leads to unhealthy chickens, which in turn do not pass on a balanced nutritional content to your dog when eaten. An excess of omega-6 fatty acids can lead to chronic inflammation and a variety of diseases in dogs. It should be noted though that this argument would also apply to cooked chicken, and that as long as chicken is only given as an occasional treat and makes up a small percentage of your dog’s overall diet, his level of omega-6 fatty acids shouldn’t get too out of control.

Some people who advocate a raw diet for dogs believe that raw chicken is ok, as long as it is fresh, sourced from somewhere you trust, and the appropriate hygiene precautions are taken – including rinsing the meat before serving. The reason for this is that dogs have more acidic stomachs than humans, which makes them less vulnerable to the harmful bacteria potentially contained in raw chicken. Salmonella, in particular, does not often cause disease in healthy dogs, and rarely presents severe symptoms – although it does happen, and can still be fatal in the worst cases.

Is Raw Chicken Safe for Dogs?

For the reasons outlined above, it is generally not considered safe to feed your dog your chicken. Although dogs have stronger stomachs than humans, the risks from Salmonella and Campylobacter bacteria are still present, and can be serious. The only way that raw chicken could be considered safe for dogs is if you are certain the chicken is free from harmful bacteria – but even if the strictest of precautions are taken, you can never be 100% sure of this.

What if I Want to Feed my Dog Raw Chicken Anyway?

Some dog owners, after considering both sides of the argument, will still be tempted to feed their dogs raw chicken, perhaps deciding that the nutritional benefits outweigh the potential risks. If you feel this way, you should consult your veterinarian for advice prior to feeding your dog raw chicken (or making any major change to their diet). If your vet, after considering the health of and risks to your dog, gives you the go-ahead, you should still be very careful. Make sure to choose human-grade meat from a reputable source and always give it to your dog fresh. Take care when preparing it and rinse it before serving to your hungry pooch as an added precaution.

What Can I Feed my Dog Instead?

As we’ve already mentioned, boiled chicken can be a great alternative to raw chicken, as it still contains lots of the protein and nutrients found in raw chicken, but the boiling process will kill off any harmful bacteria that may be present.

If, however, you are determined to give your dog the benefits of a raw food diet, you could try giving him an alternative raw meat, such as lamb. Ensure that the meat is human-grade, and avoid processed meats and those marketed for pets, as they often contain preservatives that can be harmful to your dog’s health.

You could also give your pup a meaty bone, such as raw lamb ribs or flaps. It is best to offer these to your dog only once or twice a week, alongside their regular diet. Make sure that the bones are completely raw, as cooked bones can splinter. Additionally, check that the bones are large enough that they will not get lodged in your pup’s throat, but not so big that your dog might break his teeth on them – marrow and T-bones are best avoided for this reason. You should always consult your vet before giving your dog raw meaty bones, to check it is appropriate, and get advice on the best kind of raw meats and bones for your dog’s age, health and breed.

To summarize, in answer to the question ‘raw chicken for dogs: is it safe?’ – well, no, not really. Although there are many advocates as to the numerous benefits of raw diets for dogs, the rare but real health risks posed by potentially present bacteria such as Salmonella and Campylobacter in raw chicken are pretty hard to ignore. Boiled chicken will give your dog a similar nutritional value, and is a much safer choice. If you really want to feed your dog raw chicken, make sure to consult your veterinarian first, choose high quality meat and take appropriate hygiene precautions.

Overall, given the severity of the diseases that could be caused by giving your dog raw chicken, it is probably safest to avoid it – no matter how much he turns those puppy dog eyes on you! 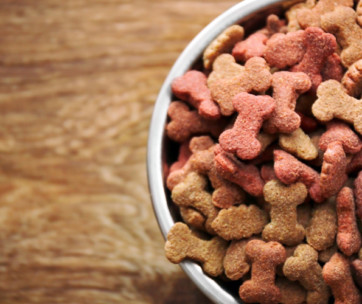 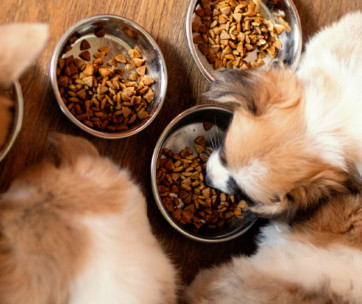 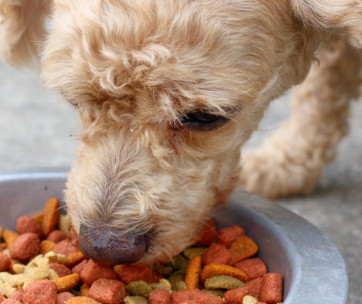