By Krista Martino
Published 15:14 pm
PetSide may earn a small commission from affiliate links in this article. Learn more
Share:

The three-year-old pitbull that goes by the name Russ had been missing from the California Lake Tahoe region since the Caldor Fire in August 2021, after his owners were forced to evacuate their home for their own safety.

Russ the three-year-old pit bull had somehow become lost in the Sierra Nevada mountains since his disappearance but has now safely been returned to his owners. His owner who works as a traveling nurse had been forced to evacuate her home during the California fires in the Lake Tahoe area and was sadly unable to look for his missing dog until after the fires subsided.

In December 2021 a skier visiting the Sierra Nevada mountains contacted authorities of the area to report a sighting of Russ out in the open snow. The Washington Post reported on the sighting. The report explained that the skier had attempted to approach Russ upon seeing him, but in his vulnerable state, he growled at the skier to prevent them from coming any closer. As a result, the skier decided it would be a good idea to photograph the sleeping lost dog and post the images to Facebook in the hopes of finding his owner with the power of Social Media.

The post, having been shared several times, eventually caught the attention of Wendy Jones, the executive director of TLC 4 Furry Friends and Tahoe PAWS. Jones is based in South Lake Tahoe and felt it necessary to attempt to arrange a rescue mission to save the lost pup, despite her being in the middle of a different rescue at the time.

Jones was able to bring together a couple of her fellow rescuers – Elsa Gaule and Leona Allen, who began planning how they would go about saving the dog from the dangers of the subzero environment he had found himself in.

“We knew that time was of the essence,” Jones told The Post. “The dog had been out in the snow all day, and we knew how cold it was.”

Having gathered all of the equipment they would need to mount the rescue, including snowshoes and a sled, Gaule and Allen began what Jones described as an “intense, pretty emotional” rescue, fueled by adrenaline and a desire to see the dog returned home safely. 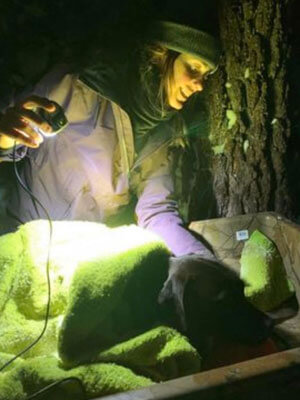 The two-woman rescue team hiked up the mountain as quickly as they could to retrieve Russ when they eventually spotted a dark shape beneath one of the trees on the mountainside. However, relief turned to dread as they realized Russ didn’t appear to be moving at all. Regardless, they continued to approach the dog, fearing the worst, when Russ slowly opened his eyes.

After reaching the dog, Gaule recalled how she has petted him under the chin to show him some comfort and he had apparently rested his head on her hand as she petted him. Once they had earned his trust enough to be able to comfortably pet him and handle him they had to figure out how to get him to safety.

Gaule said that they were unsure as to how to proceed having finally reached him and settled on having him travel back down rested on Allen’s lap aboard the sled in order to maintain his body heat and keep him from attempting to escape. The trek back down took two hours to complete.

Allen described him as “the sweetest thing on the planet, just the most amazing dog.”

Wendy Jones later spoke with PEOPLE about the daring rescue undertaken by the two heroic and how the hillside Russ had been found on was covered in over five feet of snow. Furthermore, all things considered, Russ was in “pretty good health” and was quickly turned over to El Dorado County Animal Services (EDCAS) to be checked over by a veterinarian the moment he got to the bottom of the mountain.

Whilst Russ stayed in the shelter he was visited daily by TLC 4 Furry Friends & Tahoe PAWS volunteers wanting to remind him that is very much loved and bolster his spirits until he was able to get home again.

Fortunately, Russ has been microchipped by his owner, who had kept the chip information up to date meaning EDCAS was able to contact Russ’s owner and return the dog safely home. Jones explained that his owner was ecstatic to be getting his dog back, as he has “assumed that Russ had been lost for good.” 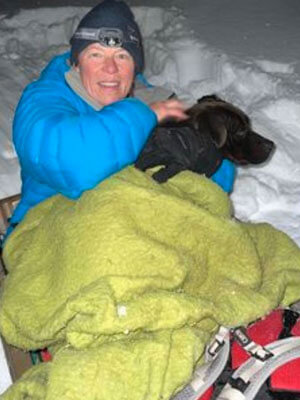 A Facebook post by Tahoe PAWS describing what had happened also highlights the importance of microchipping and ensuring the data provided is accurate in order to guarantee your pet’s safe return once found. They also explain that any missing animals should be reported to your local Animal Services department to ensure shelters are aware of it.

Speaking with the San Francisco Chronicle, Allen explained how this rescue was among the top rescues, having worked some “pretty gnarly rescues” in the past. She described how the relief, joy, and elation she felt when Russ opened his eyes and lifted his head had been overwhelming and will be hard to beat. “It’s one more life that gets to live happy and warm and safe,” she said.

Tahoe PAWS and TLC 4 Furry Friends welcome new volunteers for anyone that is willing to help out. Additionally, anyone wishing to make a donation to the organization can do so by heading over to their website, where you can find out more about what they do, or contact Wendy Jones with at 775-721-3647 (DOGS) or [email protected] Donations can also be made via post – the address for which can also be found on the website.

Rescuers Intercept a Truck Saving 52 Dogs From The Slaughterhouse