By Petside
Published 13:31 pm
PetSide may earn a small commission from affiliate links in this article. Learn more
Share:

Rachael Lawrence from Essex had been without her cat, Barnaby, since mid-2021. Fortunately, she knew her cat exceptionally well and was able to recognize his distinctive sound in the background of a phone call with her vet whilst discussing another pet.

The 40-year-old mother of three was absolutely delighted to be reunited with her lost feline friend, who, according to Lawrence, had been missing for other eight months by the time they were brought back together. It was unknown how the two-year-old cat had managed to get himself lost, but at least he was home again.

Lawrence had recently bought her other cat, Torvi, in for a procedure. Whilst speaking with her veterinarian about how the procedure had gone and how Torvi was recovering, Lawrence heard a familiar sound in the background. She had asked her vet in the meowing she heard was coming from her cat Torvi, but the vet told her that it was the meow of a stray cat that had been bought into the surgery a week prior to Torvi’s visit.

After having her initial intrigue dismissed, Lawrence hung up the phone without the intention of discussing the matter further. However, the sound of the meow had stuck in her head. Lawrence told the Daily Mail that it had been “bugging” her, “because I recognized the meow.’

After contemplating the sound for a while, Lawrence contacted the vet again to further discuss the cat in question. She had asked if the cat was black, to which the vet responded “yes”. She then asked if the cat had a white patch on one of its hind legs, to which to answer was also “yes”. 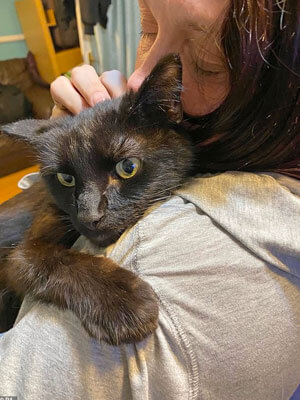 When it came time to collect Torvi following his procedure, Mrs. Lawrence headed to the vet surgery with a photograph of Barnaby in hand to have the vet identify whether it was the same feline. Barnaby had lovingly been nicknamed Fatman by his family.

She explained to Daily Mail that the moment the stray cat was bought into the room she recognized him instantly as her eight-months-lost family pet. She described that upon seeing Barnaby she began crying hysterically.

She could not believe that a cat that had been missing for over eight months, including having to survive through the freezing winter temperatures, had managed to survive and find its way home. She immediately video-called her three children, Amelia, 7, Joshua, 11, and Ben, 12. Lawrence explained how once they answered the call she opened with “look what I found.” According to Lawrence, the children were absolutely ecstatic at the site of their “Fatman”.

In the time he had been missing he had lost a significant amount of weight, was covered in scabs, and was missing a substantial amount of fur. But otherwise, he was in remarkably good health. Apparently, the lost kitty had just been happy to be picked up and hugged by his beloved owner.

‘We just need to fatten him up to get him back to Fatman!’ Lawrence said.

According to Lawrence, the family had paid to have Barnaby chipped just in case such a time would arise that he would go missing. However, “it clearly wasn’t done properly.”