By Krista Martino
Published 16:07 pm
PetSide may earn a small commission from affiliate links in this article. Learn more
Share:

Fagin’s Haven Rescue was able to amass a large group of people to assist with the rapid recovery of a lost dog seen wandering Scenic Highway. The poor pup was seen with a large clear plastic jug stuck on it’s head, preventing it from being able to have access to any food or water.

Brittany Dunn was the first to spot the trapped dog whilst she was out delivering the mail along Scenic Highway. As soon as she saw the dog she decided to attempt to help it, however, despite her own effort and the efforts of a local man who came to her aid, they were unable to gain the dog’s trust. “The dog wouldn’t come to either of us,” Dunn had recalled.

That was not the last time Dunn saw him, as she spotted the trapped dog several more times over the course of her route at various points on Scenic Highway. Each time she would stop and try to help him out, but to no avail as he refused to allow her to get with arm’s distance of him.

Dunn decided to snap a photograph of the dog before continuing with her rounds. Upon returning home, she posted the photographs on Facebook in the hopes of bringing the pup to the attention of the locals.

It was important that the dog be found and helped as quickly as possible, seeing as there was no way of knowing how long he had had the jug stuck on his head. His emaciated appearance would suggest it had been some time since the dog had gained access to food. Though it was a large container, that clearly allowed enough are in for the dog to breathe, there was no way at all in which he could eat or drink.

Jolene Fagin of Fagin’s Haven Rescue saw the post and immediately attempt to find and save the dog by herself the following Saturday. However, she had been unsuccessful in her search and felt it would be best to call in some help. 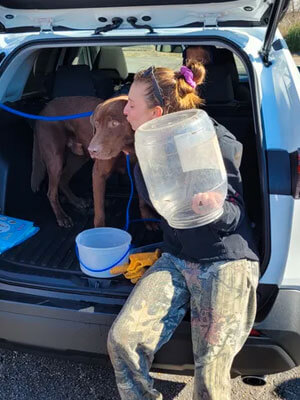 Fagin eventually put together a group of over 35 rescuers, all eager to quickly locate and free the starving dog. According to some of the rescuers, he had been seen around the 2600 block of Fairview Road.

According to Fagin, the rescuers would regularly pass one another during their search and update each other on their progress. After a period of search, the dog was spotted in a new area, around the 4800 block of Scenic Highway.

The person who eventually succeeded in gaining the dog’s trust and getting close enough to remove the jug from his head without harming him, was a mail carrier by the name of Ashley Smith.

Fagin praised Smith for the recovery and rescue of the lost dog, saying, “Ashley was the rock star today.”

Dunn described the rescue, explaining that Smith had needed to tackle the dog in order to get him to remain still long enough to remove the jug. Upon the jug being removed he had bolted away from Smith in a panic. However, the rescue group on the scene quickly pursued him, eventually catching up with him around Meighan Boulevard.

According to Fagin, and eyewitnesses, the dog had traveled a lot whist being trapped inside the jug. He was exhausted and hungry, but otherwise in good health.

Apparently, there was no clear evidence as to whether the newly-saved dog had been a long-term stray or abandoned in the area. Fagin speculated that the dog may have smelled food inside the container – leading him to put his head inside to investigate.

There had been many tears of relief upon finding and rescuing the dog after knowing he had been lost in this condition for at least a week. Fagin was extremely grateful for the response of the community and impressed by the effort put in by each of the rescuers.

Chris Moulds, who also shared images of the lost dog and assisted in the search, has stated that he will be facilitating the placement of this dog now that he has been found. At this moment in time, the dog has not been adopted and it is unknown whether he has been claimed or whether he will be going into foster care, or a rescue group shelter.